Tag: A Boring World Where the Concept of Dirty Jokes Doesn’t Exist 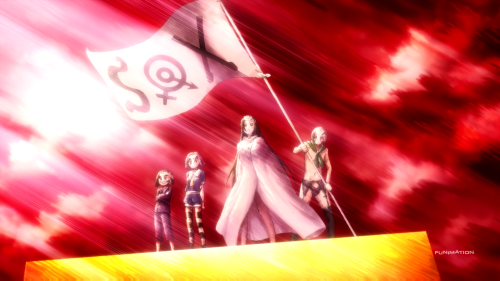 Shimoneta to Iu Gainen ga Sonzai Shinai Taikutsu na Sekai (Shimoneta from here on out because that title is ridiculously long) reminded me of a tale. It is a tale from my childhood, back when I was a spry young boy with strict parents.

Their strictness should not be underestimated. Growing up, I was disciplined to never swear. This has carried over into my adult life; I very rarely swear while out in public. (In private, however, all bets are off.) One day, we visited the family cottage. That day, I was there with my cousins and my brother.

Probably due to that rebellious stage of our lives, we decided that enough was enough: We were going to swear. But we were not just going to say a bunch of curse words in the living room. Instead, we decided to take our behavior to the trampoline on the side of the house. The second we got onto the trampoline, our mouths and brains started working. The jumps-to-dirty-words ratio quickly became imbalanced; the pine trees turned into scarlet oaks from all the blushing they were doing.

Our swearing escapade eventually ended. We were never caught, but that feeling of freedom has never been matched since. And considering Shimoneta, I know now that Kajou and the rest of SOX felt exactly the same.