Whales are intelligent, majestic creatures. Rulers of the sea by size and by power.

In comparison, Kujira no Kora wa Sajou ni Utau has no size. It has no power.

All it really rules over is the bottom of the ocean – right where it belongs.

END_OF_DOCUMENT_TOKEN_TO_BE_REPLACED 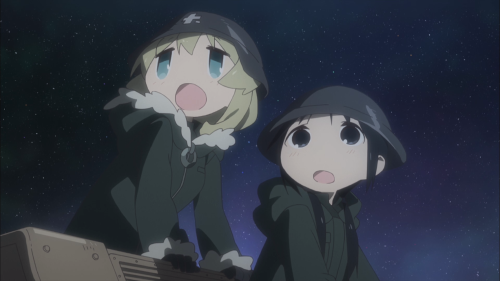 Unlike the leading ladies of Shoujo Shuumatsu Ryokou, I probably would not survive the apocalypse.

It first assumes that I’d make it through whatever horrible catastrophe would befall humanity, and I would just-so-happen to be lucky enough to have a fighting chance. But then my prospects would reach zilch real quick when most everything else has disappeared: life’s pleasures, family, some semblance of health.

I wouldn’t know what to do with myself, and I’m sure my mental state would degrade as hopelessness sets in. However, after finishing this anime and seeing the ways in which these girls approach such a world, I’ve learned that there may yet be optimism left to cling onto.

END_OF_DOCUMENT_TOKEN_TO_BE_REPLACED

Review/discussion about: Houseki no Kuni

(For a better fundamental understanding of characters, please check out my previous essay on this exact topic, “Houseki no Kuni, Toy Story, and Understanding Characters”.)

The geological timescale views singular months and years as unregistered blips on a radar.

To us regular folk, though, even just a tough few hours at work can seem like an eternity. We value our time greatly, thinking about that joke we heard the other day or looking forward to that cool party in the weeks to come. And, as the saying goes, “Time flies when you are having fun.”

That’s why the here and now is so precious; the present is a valuable existence we can almost never take for granted. In this time, a curious anime titled Houseki no Kuni emerged, and the fact that we’re lucky enough to have it around should not go unnoticed.

END_OF_DOCUMENT_TOKEN_TO_BE_REPLACED

Can a character be understood in a more refined way?

What does an anime about a bunch of gemstones and a film franchise about a box of playthings have in common?

There’s at least one more major commonality between them: Houseki no Kuni and Toy Story each host a diverse cast of characters who build their tales into how we view them today. So, having recently finished the former and having always being a big fan of the latter, a question arose in my brain: What really does go into making a character?

This essay will take a look-see into characters. How they are defined, what impact they contain, and why understanding the distinctions among them is worthwhile. Furthermore, for comparative purposes, relevant examples from Houseki no Kuni and Toy Story (what with its fourth iteration on the way) will attempt to illustrate the topics at hand.

Hopefully, the approach and the examples will make it easier to grasp these concepts while also adding in a bit of extra fun. If nothing else, it should serve as a primer for those new to these points and a refresher for those who already have a knack for them.

Without further ado, let’s get started!

END_OF_DOCUMENT_TOKEN_TO_BE_REPLACED

The online definition of “apocrypha” from Merriam-Webster states the following: “writings or statements of dubious authenticity”.

For those people in-universe who somehow got their hands on Shakespeare’s perspective of the trials and tribulations within Fate/Apocrypha, they would most likely agree that such a word fits his work all too well.

But for the Masters and Servants who underwent these troubles themselves, they would obviously disagree, stating that fate decreed it so.

END_OF_DOCUMENT_TOKEN_TO_BE_REPLACED

Review/discussion about: Just Because!

Like a couple of the characters in Just Because!, I too went through the grueling process of test taking in the hopes of earning high scores and favorable university-related invitations. They went to cram school, so they have a one-up on me in terms of drive, but, as someone who empathizes with their position, I don’t envy them one bit.

As for the tale told around them and their close friends, the results may just barely pass the mark.

END_OF_DOCUMENT_TOKEN_TO_BE_REPLACED

Each sunrise brings sunshine. But, eventually, that sunshine must give way to a sunset.

The same similarly goes for Love Live! Sunshine!! 2nd Season, a metaphorical sunset for the school-idol group Aquors and their hard-fought journey. While it does not sing nearly as loudly or as proudly as its prequel, a few rays of hope sneak in nonetheless.

END_OF_DOCUMENT_TOKEN_TO_BE_REPLACED 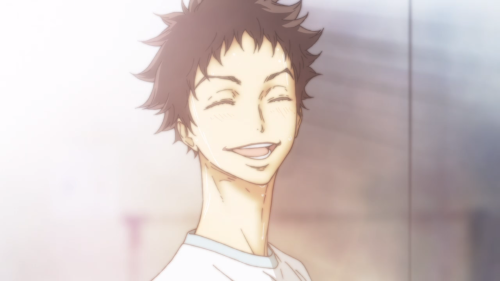 For as long as I have known my older sister, she has been a dancer through and through.

Everywhere has counted: at the school talent show, at her local studio, at numerous recitals, at different states. Everything has counted as well: tap, ballet, hip-hop, Latin. Across her entire leg-driven journey, she has claimed enough awards and cheers and experience to last a lifetime.

Basically, she has seen and partaken in nearly all that dance has to offer. Despite her dancing expertise, though, I have yet to hear any mention of ballrooms. And after watching the entirety of Ballroom e Youkoso, I can confidently say, as someone with zero dance moves whatsoever, she is seriously missing out.

END_OF_DOCUMENT_TOKEN_TO_BE_REPLACED

A peculiar shape, that. Some people refer to it as a diamond (hence the royalty). Others, with technical knowledge of Euclidean geometry, are quick to point out that squares are special exceptions (to said rule).

No matter which side jousts first, this anime makes two ideas clear. One, a rhombus for a mouth makes for a darn cute reaction. And two, our lives have many sides and corners to hold dear.

END_OF_DOCUMENT_TOKEN_TO_BE_REPLACED

Order up and opposite

I like to think that I’m an okay kind of dude. So, my opposite alter ego, if I were ever to have one, would be someone downright dastardly. He would perform misdeeds like wearing mismatched socks and inserting a silent “m” at the beginning of every word he spoke out loud.

Such super-evil antics would befit his own motives and contrast my own personality. If I could control this hypothetical alternate self of mine, I could then potentially earn a job at Stile, the fictional maid café of Blend S where the employees’ own personas balance out into a straightforward experience.