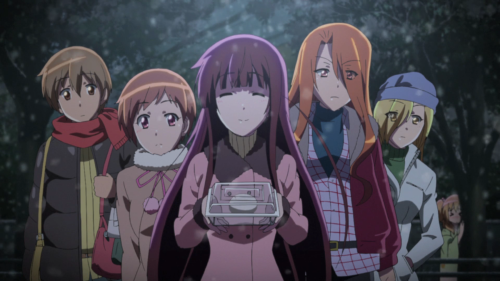 What deserves to be seen this Spring 2015?

Another season is in the books!

While everyone has been enjoying the current season of anime, I was stuck in the past, completing and reviewing the anime of Spring 2015 that I had set out to watch. I am one of those “once I start it, I do not drop it” kind of anime-watchers, which is usually the reason for my (somewhat) late list. Regardless, it is here, primed and ready to be read! This time around, twenty shows entered the arena, ten came out victorious, and only one earned the title “Best Anime of Spring 2015.”

During last season, I saw a post recently that asked a pretty simple question: “Why do you watch anime versus other mediums?” Sitcoms, books, and films are obviously fun in their own right, but something about anime makes it…different. I love that it is a niche hobby that is steadily gaining viewers. I love its uniqueness, where one adventure might be about a dungeon-crawling, would-be adventurer while the next might showcase humanity defending themselves from a plague of vampires. I love the community, with the “Best Girl” wars, the constant conversations, and the insane amount of inside jokes. I love that it started my writing career. I love that it introduced me to my favorite series of all-time, Chuunibyou demo Koi ga Shitai! (of course I had to mention Chu2Koi at least once!). It is not just one of these facets but all of them that make anime as special as it is and subsequently have me coming back for more. So if someone were to ask me that question sometime in the future, I know what my answer would be: “Because anime is unlike anything else.”

Personal anecdotes aside, before diving into the list, it is important to know two ideas: what counts and the reasoning behind everything.

First, I am an advocate of an anime “counting” in the season in which it completed. Meaning, whether it is fantastic or not, something like Ore Monogatari!! has no place here. On the opposite end, anime such as Assassination Classroom do have a shot since it concluded in Spring 2015 despite starting the season prior. So, if you do not see Assassination Classroom here on my list, that means I either did not see it or it was not good enough to make it (it is the latter!).

Second, each anime has a personalized review that demonstrates why it deserves to be here in the first place. Simply click on an anime’s name to be linked to its review to read my complete thoughts on it. For every review that I wrote last season, follow this link to my Spring 2015 Reviews page!

With all of the introductions, formalities, and rules out of the way, it is time to get to my Top 10 Spring 2015 Anime!

END_OF_DOCUMENT_TOKEN_TO_BE_REPLACED

Shot itself in the foot

A well-known philosophical question takes the following form. Imagine a teleporter that copies your body completely: atoms, thoughts, brain neurons, and so on. The teleporter works by replicating you entirely, materializing a new copy where you want to go, and then the first body – the one used to make the copy – is destroyed. Again, the new copy is perfect, and simply believes the teleportation was successful. Now, suppose the original body was never destroyed. Two of you exist simultaneously, so the question becomes: who is the real you? The original or the new? Both have the same memories, the same body, the same brain, the same thoughts, the same everything, but which one is really you? Challenging the complex notion of identity, this famous situation is highly debatable because nobody truly knows the answer. Gunslinger Stratos: The Animation is similarly philosophical in nature, but assuming the hypothetical teleporter were real, I would use it to warn the world of the woes it willfully and wantonly wags.

END_OF_DOCUMENT_TOKEN_TO_BE_REPLACED 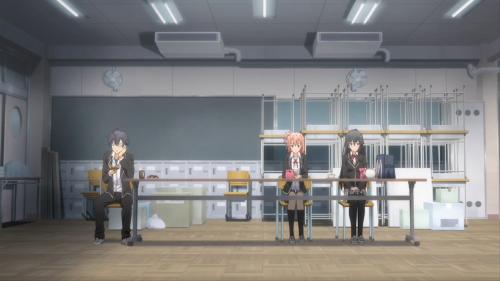 A famous adage goes along the lines of, “It is better to have loved and lost than to have never loved at all.” Putting it differently, romance is something that everyone should go through no matter the outcome, because despite the difficulties it generates, the heart-skipping, cheek-blushing, and smile-bringing make it all worthwhile. But what if that was not the case? What if, against our better judgement, the “anti-romance” took center stage? That is whereYahari Ore no Seishun Love Comedy wa Machigatteiru. Zoku comes in. As one of the premier anti-romance anime – focusing on the throes and pains of love, not the jubilation and elation it oft produces – OreGairu Zoku has one goal in mind: finding the “real thing.”

END_OF_DOCUMENT_TOKEN_TO_BE_REPLACED

Have you ever, intentionally or not, compared yourself or another person to an animal? “He is as free spirited as a bird” or “she swims like a fish” are easy to understand because the animals themselves are, too. Indeed, you would be hard pressed to find someone who does not know some of the most prevalent creatures in the animal kingdom. It also makes more sense to relate to an animal than their equivalent, manmade devices. For instance, calling someone an airplane or a boat is not as becoming because those vehicles are autonomous; they do not choose to act the way they do. Thus, “he is as ferocious as an alligator” or “she is as harmless as a butterfly” are quick and simple approaches to describe people and the way in which they behave. Etotama is all about spirit animals – the Chinese zodiacs, to be specific – showcasing a girl as selfish as a cat fighting to achieve her dream of joining the ranks of the heavens. Although the journey is short, it highlights that while we may be similar to birds, fish, alligators, butterflies and cats, we will always be, above anything else, ourselves.

END_OF_DOCUMENT_TOKEN_TO_BE_REPLACED

After completing Mikagura Gakuen Kumikyoku, I started to wonder what kind of ability I would have if I was granted one based on what I do. At first I thought of a keyboard that would create out of thin air anything I typed out in full – “Manifest Words” would be the name I would give it – because of how much I write. Then my mind wandered to a snowboard that was not so restricted and could go on all surfaces – “Any Board” – because I like to hit the snow when such an opportunity presents itself (it is pretty rare nowadays). Regardless, I know that whatever I happened to receive I would have as much fun with it as possible because that is what life needs to be: good, safe, and reasonable fun. This is what the anime tries to convey, but somewhere along the way, it loses sight of what it has to say.

END_OF_DOCUMENT_TOKEN_TO_BE_REPLACED 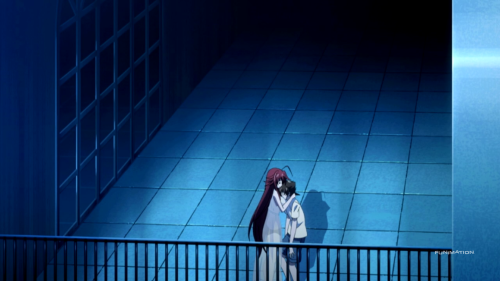 Jugs, bazoongas, melons; no matter what they are called, breasts are a universal constant. Boobs bear the “nectar of life,” cause men and women alike to turn heads, and are something that everyone can get behind. High School DxD BorN, returning for a third season, believes the same, providing busts of the large, small, round, supple, and bodacious variety. Mammaries are a wonderful part of the world, and it is lovely to see them in anime or anywhere, but the question remains: for this one, is it enough? Can its smorgasbord of boobies keep itself afloat from start to finish? Sadly, no, the anime sinks where its brethren swam.

END_OF_DOCUMENT_TOKEN_TO_BE_REPLACED

Review/discussion about: Houkago no Pleiades

As a kid in elementary school, I remember a special event that only happened about once a year. Our class would line up, head down the halls, and into the gymnasium where the “star globe” would be set up in all its glory. The star globe was a big, inflatable, silver dome that, once filled with air, could be crawled into (it was rather big). My fellow classmates and I, upon going inside, could see only darkness. That is, until the rotating fixture in the middle was turned on. Then, we were able to see, much to our wonderment, lights and constellations filling the ceiling, rotating slowly about us. At the time, I took for granted the knowledge and beauty that such a contraption provided – I saw this merely as an opportunity to escape our everyday work. Today, I have come to appreciate “the final frontier” and the phenomenon it holds, believing that our existence among the infinite mass of stars is incredibly special. Houkago no Pleiades will definitely make you wish upon the stars for something: for it to end as quickly as possible.

END_OF_DOCUMENT_TOKEN_TO_BE_REPLACED

Review/discussion about: I Can’t Understand What My Husband Is Saying: 2nd Thread 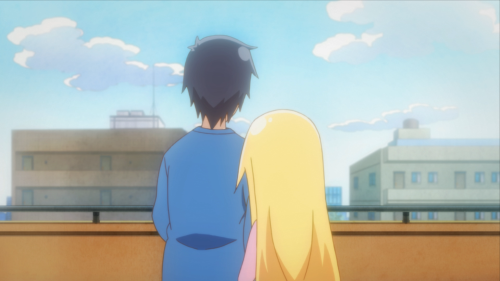 There are friends and there is family, both of which are important relationships to have and to maintain. But there is arguably one that is even greater, or at the minimum is incredibly unique when compared to the previous two: the connection to a lover. The wife or husband, the companion, the darling; the relationship that is made between two people who love each other, more so than anyone else, is a special bond that is extremely valuable. After all, they do not include the phrase “’till death do you part” because it sounds cool. I Can’t Understand What My Husband Is Saying: 2nd Thread hones in on this very bond, providing an anime that does not really know what it wants to do.

END_OF_DOCUMENT_TOKEN_TO_BE_REPLACED

Nothing to be scared of

My sister was born on Halloween, so I am no stranger to all of the common tropes that follow such a holiday. There are pumpkins to carve, candy to pass out, and the movie Hocus Pocus to watch at least once, all done to commemorate such a special occasion. Another major trait that Halloween almost always has is the prevalence of ghosts. Ghosts are not real (like most other phenomenon hosted during that time of year) but they usually beg the question: what if? If ghosts suddenly became corporeal tomorrow, would you avoid them entirely? Or would you attempt to converse with them to learn more about who they happened to be? Re-Kan! focuses on these supernatural beings, giving an anime that relaxes both body and mind.

END_OF_DOCUMENT_TOKEN_TO_BE_REPLACED

Review/discussion about: Is It Wrong to Try to Pick Up Girls in a Dungeon?

Needs both help and an answer

I think it is pretty typical for people to have a role model. It might be someone who is always around us, like a family member or a close friend. Or it might be a celebrity or athlete who, while not having direct impact on another’s life, manages to affect countless others by simply being. For me, it is my father. He provides for his family, he works extremely hard, and he always, always wants only the best for his kids. Something simple he does that I hope to replicate is, during Christmas (we call him Mr. Christmas because he gets so into it), he wraps the base of the trees around his house with green lights and the branches wrapped in red and white ones, so that they become trees of lights rather than simply trees with lights. He is someone I will never fail to look up to, and will always aspire to be. Is It Wrong to Try to Pick Up Girls in a Dungeon? is actually a rhetorical question, with it instead focusing on this kind of inspiration, providing its audience with a less than stellar anime.