Recently, I was asked to visit a friend’s house to help setup some technology in his home. I accepted. Not because he offered me a going rate of ten dollars per hour (which was kind of him but unnecessary), but because he is a good friend of mine that I want to help.

Komori-san wa Kotowarenai! (or, in English, Komori-san Can’t Decline!) features, coincidentally enough, a girl named Komori. She never refuses to help others, providing a simple anime in the process.

Komori-san Can’t Decline! is an extremely short anime. At two – two – minutes per episode, the anime can literally be started, watched, and completed in less than thirty minutes. As such, not a whole lot can be said.

Each episode follows Komori helping out anyone and everyone that asks for help from her. Carrying boxes, giving directions, and taking pictures are just a handful of the ways in which Komori helps out her fellow friends.

Much of the comedy in the anime relies on Komori and her incessant need to help. For example, her drinking everyone’s milk cartridges leads into a discussion on her massive breasts. Her large height makes her friends use her for shade during a hot day. Her helpful nature has her considering becoming a detective. This comedy is rather quick, fitting the even quicker anime.

What help is and means gets explored throughout the small season

Along the way, the anime comes to explore the idea of helping others. Why people help. Whether or not it is wrong to help others despite potentially making the situation worse. What helping others results in. Relative to the anime (especially considering its overall length), it explores this theme of helping as well as it can.

Some episodes even focus on themes like friends and romance. The motif of helping still exists within these episodes – Komori, Megumi, Masako, and Ootani help each other and others. And, since helping naturally leads into friendship and romantic developments, such themes are natural, too.

Technically the anime does not explore these last two themes as much as it does the helping theme, so they are not as important. And, arguably, these last two themes distract from the helping theme, too. Still, having them around strengthens the theme on helping and, collectively, they all help to balance out the comedy that Komori-san Can’t Decline! usually leans on.

When it comes to the actual animation, Komori-san Can’t Decline! does not have a whole lot of it. But the anime almost always makes sure to keep two parts moving: Komori’s breasts.

They are big and technically one of the defining features of her character. So the anime animates them accordingly. Not just in moving around or pressing her chest against some boxes. Something as simple as lifting her umbrella or her fist, which happens to hit the underside of her boob, causes her breasts to jostle (slightly-over) appropriately.

Komori’s chest naturally leads into her and the other character designs. While her boobs are focused on the most, she has other defining features: Her height, her striped, thigh-high socks, and, most strikingly, her multicolored eyes. Each feature makes her stick out even further, resulting in people singling her out for help.

As for the other designs, Ootani’s design is rather plain, but this plainness fits his character since he does not stick out and therefore does not get called on for help. Komori’s friends, Megumi and Masako, try to be slightly different. Megumi’s blonde, twin-tailed, eye-covering hair with light-blue eyes and Masako’s dark-green hair, all-black eyes, and floor-touching skirt make Komori’s best friends distinct without being obtuse.

For all three (and for most of the background characters), they appear to be shorter than normal, accentuating Komori’s height even further. Also, a positive shout-out goes to Megumi’s father. The anime presumably did not want to create a design for him, so they only showed his hand and arm waving from outside of Megumi’s room. A silly and welcome inclusion. Also (also), a negative shout-out to the scrolling text that did little else besides be distracting when it occurred in nearly every episode. An unnecessary and unwelcome inclusion.

The rest of the art is soft and simple. Made so by the white coating and shininess of the characters as well as the white coating of the backgrounds. The anime sticks mostly to the school grounds, but it occasionally has the cast at other locations such as the beach, a festival, or at their respective homes. The backgrounds are boring, but, regardless of what is shown, the simplicity and softness fit the gentle anime well enough.

While the characters of Komori-san Can’t Decline! do not see any development in the short time that they are on-screen, what they represent definitely follows the direction of the anime.

Komori’s view on the world is one that everyone should adopt: She likes to help others. Plain and simple. She helps people not just to make herself feel happy but also to make others happy. She is as selfless as someone can be. As she says, “When people depend on you, it means they trust you. That makes me happy. And that’s why I can’t decline anyone today, either. I won’t decline!”

Ootani is helpful as well, but, as he says, he does it to make himself “feel better.” He is not tall like Komori. He is not popular like Komori. He is not relied upon like Komori. Altogether, he does not get the same opportunities as her, so he seeks them out. But because he is so helpful, he understands Komori. And, since they are both similar and opposite, the hinted-at romantic relationship between them makes even more sense.

As for Megumi and Masako, they do not necessarily have as much focus throughout the season. Instead, they are mostly there for comedic and supporting purposes. Them teasing Komori about looking at Ootani while he swims or them visiting Komori when she gets sick prove that they play their minor roles as well as they can.

Looking at them collectively, they advocate the same message that the narrative gets at: be helpful. To each other, to others. While one does not have to go to Komori’s extreme of never declining anyone for aid, helping people, as Komori puts it, allows one “to spend time with people.” It does not matter if it is getting a friend away from a situation they do not want to be in or helping someone cut some grass. Helping others deepens relationships, improving them beyond what they already happen to be.

The opening theme is, like the anime, quite short. An acoustic guitar, chimes, and drums, alongside some nice singing and lyric-and-instrument synchronization near the end, make for a happy little OP.

Besides the OP, squeaky toys, water droplets, and shining stars are used as sound-effects to make the different gags and transitions more fun than they would be otherwise. 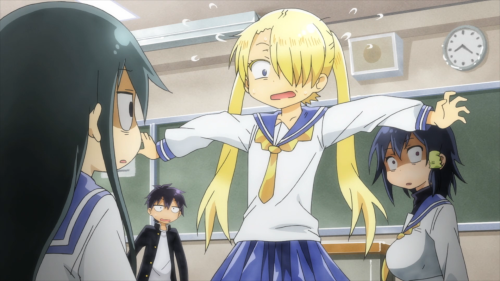 Komori-san Can’t Decline!’s other musical offerings (the anime does not have an ending theme) are comprised of very simple tracks to fit the very simple show. Music box sounds, low, heavy drums, and barely-any-notes piano pieces make up the majority of the anime’s OST. The tracks are certainly not worthwhile, but their simplicity, like the art, further the anime’s simplicity motif.

And the voice acting performances are similarly simple. Aya Uchida as Shuri uses a mature, kind voice to match the equally mature and kind girl. Maria Naganawa as Masako sounds breathy, Ari Ozawa as Megumi sounds hyper. And Reina Takeshita as Ootani gives the boy a fitting voice despite being female herself.

To reiterate, this anime is incredibly short. In fact, I may have listed nearly half of the events that occur. Because the anime is so short and simple, it does not offer a whole lot, but it also does not take a whole lot to sit down and watch it to completion.

The anime, regardless of its length and simplicity, does have spurts of funny, cute, and romantic moments that are entertaining. Komori getting all excited when someone asks her for help after not being asked for a while. Megumi hugging onto Komori tightly after everyone seems to be “taking” Komori away from her. And Ootani carrying Komori on his back following her getting lost and breaking her sandal. Short moments, but some combination of funny, cute, and romantic nonetheless.

Komori finally getting to help was both funny and cute

(Also, after writing out these three examples, I have probably now listed half of the events that occur in the anime.)

Komori-san wa Kotowarenai! is a short anime. In its short run, it has a comedic story, a cast of helpful characters, and simple art and music. Nothing impressive, nothing forgettable. Just a short and simple show. If nothing else, it makes helping others – not for ten dollars an hour but out of the kindness of one’s heart – that much more enticing.

Story: Good, comedy and helping make for a fun and purposeful narrative

Characters: Fine, while the cast does not develop, they prove that helping others deepens relationships

Enjoyment: Fine, not that worthwhile, but entertaining moments here and there