Yuri Kuma Arashi and the Effects of Symbolism, Part 7 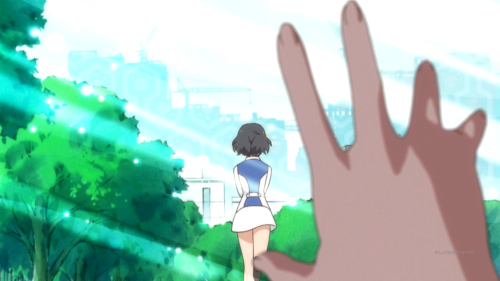 If you haven’t already, I highly suggest you head back to Part 6 and peruse the symbolism from episode eight. There we received symbolism that aided in characterizing Yuriika to the maximum, allowing us to see exactly why she has been going about targeting Kureha and Ginko for a good part of her life.

Today, we’ll be taking a look at just episode nine. This is a shorter part in the series for a reason: to highlight the masterful execution in the symbols shown and direction done by Ikuhara. Like episode six, what is presented is nothing less than amazing. It stands as one of the best episodes from the series, serving as a prime example of what symbolism can really do.

As a reminder, here are Yuri Kuma Arashi’s own themes, or what the symbols are being used for:

-Sociopolitical commentary on the perceptions of prejudice, specifically sexual discrimination and racism

-Literal: A bedside conversation with Mitsuko on the bear-side of the “Door of Friends”

-Interpretation: Ginko succumbing to feelings of lust, passion, and sin

-Explanation: This is another expert-level piece of symbolism, one of the best Yuri Kuma Arashi presents.

The black bed stands in stark contrast with the green door, gray wall, and white snow, giving it an air of not only importance but extreme foreboding. Its red pillows and covers, however, complement the black in a sexy way. This color combination is regularly used: it’s sensual, it’s dominating, and it’s filled with more instinctual feelings. At the same time, pink ribbons lace the awning, giving it a soft yet personal attachment, especially in relation to Ginko, Kureha, and the pendant.

Such is the topic at hand in the discussion between the spiritual Mitsuko and Ginko. The entire scene is wrapped in desire – Mitsuko literally and figuratively feeding Ginko, her undressing herself, and her overtaking a passive and subdued Ginko. While the outcome is disheartening, with Ginko having her feelings warped and manipulated into a “lower” form of love, what is extremely intriguing is the talk of sin.

Mitsuko states that there “isn’t a creature who doesn’t sin in order to live.” This statement is immensely profound, because it’s remarkably true. A truth that is difficult to stomach yet is evidenced throughout all of the anime. Separate instances include: the bears acting with gluttony in their eating, the majority of the girls being slothful in their ignorance, Lulu’s greed manifesting towards Ginko and the elimination of her brother Mirun, Konomi’s behavior being based on wrath, and Yuriika’s unbelievable sense of pride in her dealings with Kureha, the bears, and the girls. [40]

But the most important of sins in this situation are clearly lust and envy. Ginko’s unfortunate jealousy drives her to “kill” Sumika and Mitsuko argues that it’s not friends, but “me – desire” that is the only certainty in the world. Desire is attached to all sin – wanting to be lazy, wanting to have a lot, wanting to hurt, etc. But we know that Mitsuko is wrong about love being a “savage emotion.” Not only have we seen pure and kind acts of love between Kureha and Sumika, Reia and Yuriika, and even Reia and Ginko, but also Mitsuko is dead. She “lost” in the game of love, in obtaining Kureha and what she has to offer.

And that’s what this black bed of sin represents. It’s not just that Mitsuko, the embodiment of desire, has “entered” Ginko in a hot manner surrounded by a snow-filled, cold environment. It’s that such thinking, that love is sinful, is like a bed; relishing in sin might be comfortable, easy even, but it’s “bedded”, it’s low, it’s evil. Love does have desire and other sins attached to it – it’s an extremely complex emotion – but it is ultimately a good, happy, and fulfilling feeling.

-Literal: The Life Bears look on from afar

-Explanation: This is a smaller one, but it helps to clarify the change in themes from the first half to the second half.

As has already been stated, the first half of Yuri Kuma Arashi is mostly about prejudice towards those who are homosexual. The second half instead focuses on prejudice towards those who are of a different race — namely, the bears. The Life Bears are watching from the sidelines this time (as they normally do, for that is their place) with Life Sexy offering small tidbits of knowledge.

Kureha now takes part in the Exclusion Ceremony, and Life Sexy explains why. He talks of people as being fleeting, that they are always looking to exclude something. Because Kureha is taking part in the “festivities,” and because they are looking for a rogue bear, it’s clear that their exclusion process is both not aimed at Kureha and all about “excluding” someone for being different racially.

-Explanation: Yuriika pounces, clacks her feet thrice like her “father,” and forcefully rips the clothes off of Kureha. All of her waiting, all of her desire, has led up to this moment.

Does this scene seem somehow immediately familiar? It should, for what occurs here is masterful once more: the second half of the episode both mirrors and reflects what happened in the first half. Ginko is dominated by Mitsuko; Kureha by Yuriika. Ginko is surrounded by black and red; Kureha by white and green. Ginko is lying on a soft, comfortable bed; Kureha is lying on the rough, hard ground. Ginko’s events happen during the day; Kureha’s at night. Ginko “eats” Mitusko; Kureha is “being eaten” by Yuriika. Mitusko succeeds from death; Yuriika fails in life.

And in a stunning move, both scenes take place at the lily garden. As the picture book depicts, Ginko is “in the forest” and Kureha is “on the moon.” That is, they are separated by the “Door of Friends” that must be overcome in order for their love to be “the real thing.” But “The Moon Girl and The Forest Girl” doesn’t have them separated by a wall or a door; rather, it’s a mirror. Thus, the events taking place on either side, those revolving around Ginko and Kureha, are mirrored.

Yet, to put the “cherry on top,” we obtain further evidence that such base desire, such sin, doesn’t win. Yuriika’s “kiss” is foiled, Kureha is protected, and the two ultimately meet to send the principal away with love in her heart; love that she’d forgotten.

-Interpretation: Yuriika and Reia are together at last

-Explanation: Nothing too major here (especially in comparison to everything that came before), but this nice little scene at the end of the episode signifies Yuriika finally ending up with her best friend. The lily flower encompasses them, making their final appearance, both individually and together, a touching one.

2 Comments to “Yuri Kuma Arashi and the Effects of Symbolism, Part 7”