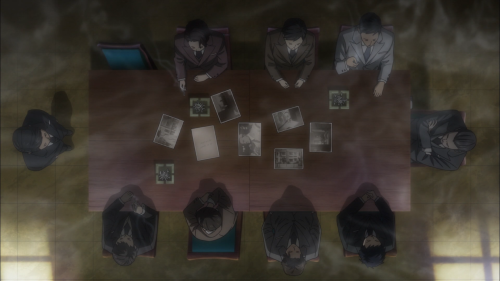 When I was a kid, I would often try to eavesdrop on my parents’ “secretive” conversations.

I would be in the basement, playing a video game or watching television. When I heard the pitter-patter above me, however, I would move to the foot of the steps. The door was closed, indicating further that my parents were discussing topics not meant for my ears.

But I was curious. I would sneak up and crack open the door ever so slightly. I would then close my eyes and concentrate, focusing only on their words. Doing it so many times, I eventually got quite good at it. My mother and father talked about problems: other family members, financial issues, and even me (and my siblings) on occasion.

When I had my fill, I would creep back down, acting as though I were none the wiser. It was thrilling to me, being able to catch information without getting caught. Very much like a spy.

And with spying in mind, Joker Game proves that spies are more than just a bunch of eavesdroppers.

Joker Game, despite the title, involves no jokesters. Instead, the anime focuses on a secret group within the Imperial Army known as the D-Agency. And, as the anime oft details, D-Agency contains the best spies the world has ever known. The elite of the elite. In other words, they make everyone else look like jokers.

The show itself has a clear format: the first episode introduces the people and the setting, and, for every episode afterward, a new tale involving a new spy is told.

To the anime’s credit, it does manage to create different scenarios one after another even if they boil down to “a spy does spy things.” Fighting with the French Resistance, a riddle on a train, and even a competing spy network (called Wind Agency) are just a few of the main events that comprise the season.

The show even sometimes portrays the episodes from a third-person perspective. A naïve soldier, a British spy who found the love of his life, and an old German nemesis allow the audience to view the spies in a different light. A light the audience would have “normally” viewed such spies because (perhaps obviously) spies rarely reveal themselves. 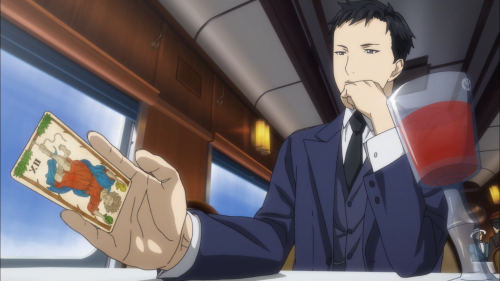 Spies are not content with simply hiding among the masses

This standalone format also brings with it one of the show’s bigger weaknesses: no overarching plot.

Because all the tales are so segmented, it makes it difficult to care much about what is actually happening and what is eventually the outcome. The anime tries to make the pushback from the Imperial Army (and other relevant entities) a thread. But a lot of the different reasons – from using “cowardly” tactics to supposed besmirching of the army despite the results D-Agency regularly retrieve – strain this thread too much.

Although, to be fair, there are certain commonalities between the episodes. Yuuki’s involvement and the World War II backdrop are the more obvious answers, but a more important one exists.

Part of Joker Game’s goal is to demonstrate what it is that a spy goes through. Torture, hand-to-hand combat, and death are some of the more extreme examples, but the show also focuses on the subtler aspects. Bluffing an opponent, investigating an area, deception, maintaining cover, and planting false information. In a sense, these details lead to the anime’s title, for, like any intense game of poker (jokers or not), similar skills are required.

Unfortunately, the anime does not do too much else. It is simply a semi-thrilling, multi-spy show concerned more with espionage than it is with grander ideals. (Except for their “don’t die; don’t kill” mantra.) Not that it has to be more than what it is (as can be said for every anime ever), but, because it barely even attempts to aim for something higher, it does not do itself any favors.

The art and the animation of Joker Game is arguably its best aspect.

Due to the episodic format, the anime visits many different spots. A British compound, a luxurious mansion, a nighttime shot of a bustling city, a German hospital, a local theater. Such variety helps to showcase how widespread the war reached and just how far the spy network invaded, supporting the main motifs of the show.

While the amount of detail in the backgrounds is not anything praiseworthy, the show does make an obvious effort to heighten interest. Some nice cinematography – such as from a tabletop angle or using a darkened, first-person perspective – are nice to see. Changes in lighting, extra civilians walking or sitting about, and the period pieces, like old-timey cars and weapons, add to the show’s overall appeal. 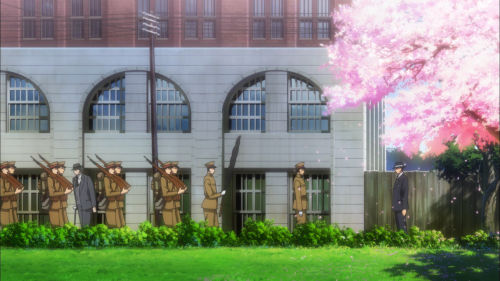 Interesting artistry can be seen at times

(And not the norm, some shots hold symbolic meaning. The cherry blossoms and soldiers in episode two and the hands of a clock aligning with the railroad tracks in episode six hold meaning to their respective stories.)

The character designs do so even more. They are slick, proper in their suited attire and handsome in their sharp faces. Them all looking “the same” continues with the spy motif further: not being able to discern one agent from another (i.e., they are all “just” a bunch of classy, young men) makes sense given their profession.

Actual animation ends up somewhere around average. Scuffles can and do break out, but most the “action” on-screen is comprised of conversations. Eyes and limbs do not remain static, though, so subtler movements can be seen throughout the show’s run.

Joker Game’s cast is interesting to talk about because, once one starts to, they have already finished.

Except for Yuuki (more on him later), almost nothing is given about these men. While it is true that some have minor characteristics – one can do some sleight of hand, one can read writing backwards in a mirror – calling them characters in the traditional sense would be unfair.

In almost any other show, having blank characters would be immediate grounds for criticism. But when one considers what the anime is – an anime centered on spies – it more than makes sense.

Yes, they are bland, but they are operatives hiding in the lands of their enemy. They have to be unassuming. They’re not like James Bond who has the fancy gizmos and sleeps with the most beautiful women. Instead, they are typical, everyday guys, commoners among commoners.

The cast are purposely meant to be blank, everyday people

For this reason, they get a pass.

As for Yuuki, the anime does (slowly) build up his reputation beyond just a disgruntled man who walks with a cane (for show). He takes the time to gather his agents’ intel. He is absolutely not afraid to confront his rivals. He thinks bowing in a suit is silly.

The show also takes some time to delve into his background. Granted, it is not a whole lot, but it proved once more that Yuuki is a hardened fighter, a man willing to even sacrifice his left arm to escape a harrowing situation.

Even so, Yuuki likewise has little known about him. In fact, some of the details may even be flat-out lies. Regardless, the information surrounding his character, much like the men he commands, does not go beyond a precursory amount.

Joker Game’s opening track takes on a jazz-like feel, creating class and smoothness that fits both the show and the characters within. Lots of trumpets and a funky background beat comprise much of the song, and, while it does not deviate too much from its rhythm, and the vocals are not exactly stellar, it is still a passable piece nonetheless.

In contrast to the OP, the ending track ditches the trumpets in favor of drums and a faster-paced composition. This time, the song becomes more optimistic in tone, or, at the very least, more uppity in its presentation. While the vocals and the harmonizing are not anything special, the ED is, like the OP, an acceptable inclusion.

Atmospheric music makes up most of the sound-work

Arguably, the rest of the original soundtrack is the best part of the music. It may not have anything memorable or even catchy, but it does have strength in molding out an atmosphere. Clanging, ominous sounds. Lots of piano for both sentimental and mysterious purposes. Plucked cello strings to help smooth out some of arrangements. The OST is mostly a methodical set of songs with the occasional tenser piece, fitting well with the show and its overall aims.

I cannot say I walked away from this one holding it in high regard.

Episode four was easily the low point thanks to the sudden evilness of the villain near the episode’s conclusion. The entire season was also plagued by the same synopsis that played right before the OP. A small annoyance, sure, but that felt like more time the anime could have used for other material instead.

Yet my biggest gripe comes from the cast, for they just are not compelling characters. No matter how intended their lack of characterization, they simply do not make for very interesting people. Their profession, what they do on a regular basis, certainly is. But they themselves are far from any top-character list of mine.

I will say, however, that I liked parts of the show. Episode five was perhaps my favorite due to the Robin Crusoe metaphor (although I still need to read the book myself), and the spy himself actually encountered grave danger. I also liked the maybe-possible romance angle that appeared in episode twelve (due to all the talk about Manchuria and the relevant people ending up there).

Dolphins somehow took the spot for most entertaining moment

My favorite moment, though, does not involve spying or something similar.

In episode seven, the spy whistles loudly, commanding dolphins to come from out of the ocean. I thought to myself, “I wish I could do that.” And thinking on it more, if this small scene happened to be my favorite from the whole season, that speaks a lot about how much entertainment I truly got out of the anime.

Joker Game is not a joke, but it does not win any games either. Its art can be nice, and its music can be fitting. Its cast is even technically what they “should” be. But the lackluster narrative and the unengaging content keep the show from shining brightly. In other words, it only made it halfway up those stairs.

Story: Bad, while each episode features a new way to view spies and spying, no overarching plot and no larger ideas prevent the narrative from being something more

Characters: Fine, nothing may be given about the cast, but such misdirection fits the spy motif

Enjoyment: Bad, whistling to call some dolphins was the highlight