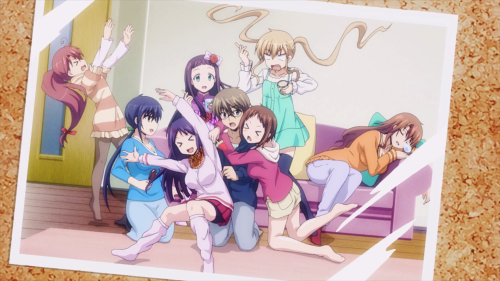 My wonderful sister got married near the end of last year.

Her husband (now my brother-in-law) are perfect for one another. They have each other’s backs, putting up with the other’s “baggage” despite their differences. And with him being one of the nicest guys that I know, and her being overly supportive, they are as compatible as can be.

I know they’ll have a successful, happy marriage moving forward. At the minimum, they’ll be a lot better off than whatever Okusama ga Seitokaichou!+! presented.

As expected, Okusama contains similar content to that of the first season. Izumi and Ui are shacked up, leading to the pair’s multitude of sexual romps. Unfortunately, Okusama also includes a ton of unnecessary elements that ultimately ruin the entire experience.

Chief among its problems is a refusal to let any of its sexual content play out. Not only in first-second-third base terms but also in emotional terms too. Izumi and Ui are about to passionately kiss? In barges Rin to stop it before it even happens. They’re about to get frisky in bed? Sorry, Izumi, but premature ejaculation would like a word. A Rin-and-Ui double feature ready and waiting? Whoops, Rin’s sister conveniently shows up to say a few words and derail the fornication.

Even when the anime finally has the guts to show off its sexual content, much of it simply lacks spice or at least variety. One too many almost-touched-lips kisses with Izumi and groping without any flair lead from one boring sexual encounter to another. Izumi helping Ui take a suppository is as adventurous as the anime gets.

These events and the ones outside the realm of debauchery also go against Okusama’s previous season’s theme on marriage even more so than ever before. The anime constantly places Izumi in situations that don’t involve Ui whatsoever or simply don’t mesh with the marriage aspect of their relationship. 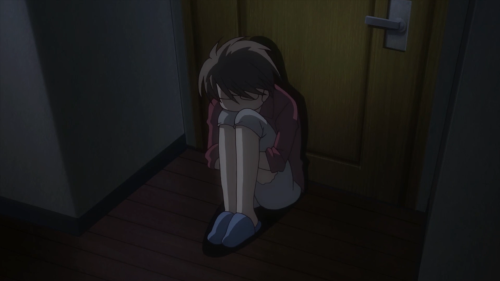 The sexual content is constantly derailed no matter what

For instance, they raid the photography club’s clubroom, but it’s an event that has little (if anything) to do with how Ui and Izumi get along. What occurs, then, is a slew of scenes that should have never been allowed to happen in the first place since they continue to reinforce why the anime does not deserve to be titled My Wife Is the Student Council President.

The anime does keep its motif in mind on occasion, like when Ui complains about Izumi not giving her enough attention (and touching) or when Izumi eats the food Ui concocted despite its nefarious aura (because that’s what a man should do). Sadly, Okusama would much rather give Rin yet another unnecessary shot with the male lead, bringing the anime back towards polygamy.

Okusama does have its small moments. The condom that Rin’s older sister gave to Izumi returns as a joke later in the season when Rin discovers it in his desk drawer, and the final episode proves that the anime didn’t forget about Ui’s parents from last season, giving them a miniscule cameo to cap off this this season. Plus, it does have the usual cute pouts and comedic jokes to fill the gaps between the promiscuous asides.

Unfortunately, so much of the content is boring, aggravating, or otherwise lacking that whatever else Okusama attempts to do cannot heal its self-inflicted wounds.

In this second season of Okusama, the amount of actual animation seems to have decreased. Characters will sometimes shift forward without moving their limbs, and the events themselves usually end up as just the characters speaking to one another while standing. Rin’s breasts do jiggle at every opportunity, but that’s not enough to justify how static a lot of the scenes feel. Especially when the sexual content refuses to give much more than Ui sucking Izumi’s finger or showcasing yet another still-framed picture of the girls as naked as possible.

Speaking of the sexual content, the anime at least (and once again) provides a censored and uncensored version. 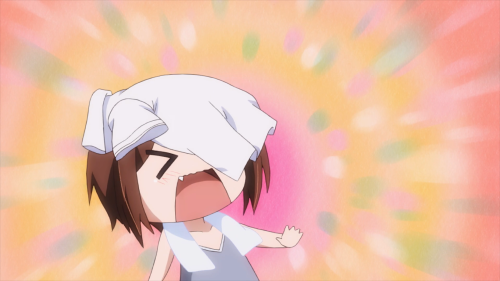 Naturally (and once again once again), the uncensored material is the biggest draw of the show and wins out over the censored material. Granted, all that’s really shown are nipples, and the explicit material that’s too tough to cover up with baby chicks is replaced with theatrics that aim for cute, comedic relief. But the crotch shots, despite their perversion, are why the audience are there in the first place, so uncensored is really the only way to go.

The artistry in general still doesn’t impress, but it gets the job done. While the fast-moving backgrounds and the talking-head bubbles are relied on more than usual, Rin and Ui still have their attractive designs, and the silly reactions with the squatter, comedic depictions of the characters invites the cuteness and the funniness with ease.

As an ecchi, comedic short, Okusama doesn’t have the character depth that regular dramas tend to include. However, that doesn’t excuse the anime from a lot of choices it makes regarding its cast.

For example, Rin receives a lot more attention this season. Said attention is mostly going towards her chest, but Okusama also highlights her naivety when it comes to love and the difficulty she has in accepting Ui’s working theories on letting lust live. Thus, Rin starts to take part in the lasciviousness, letting Izumi release his pent-up hormones with her breasts or thinking about buying a black bra to satiate Izumi’s own desires.

Yet, during most of Rin’s sexual interactions with Izumi, the outcome is the same: punching him in the face. Despite initiating the situation herself, she’s the one who ends it (often in a violent manner).

To be fair, her even putting herself in those situations is arguably a big step forward for her, considering her role as the head of the disciplinary committee and her previously discussed naivety. But she never truly leaves this quasi state of liking-Izumi-but-not-really. Plus, it gets quite old quite fast to see her stop her progression for the umpteenth time when she was the one to start it in the first place.

Ui and Izumi are no better. Arguably, they are worse.

As a (supposed) couple, they don’t have very many scenes together. With Rin refusing to go away, the introduction of Honoka, and the comedy involving the side characters, Ui and Izumi rarely have any alone time. When they finally are alone, they almost never exchange words of love or commitment, and the relationship they do share does not rise above friends with benefits. 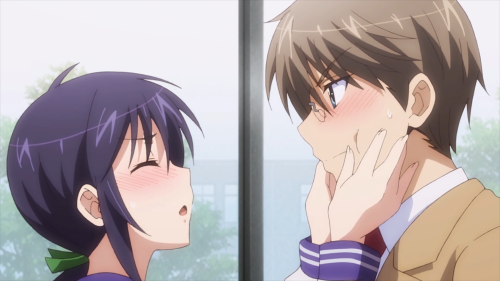 It gets worse. Looking at Ui and Izumi individually, they don’t help themselves or each other.

Ui constantly lets Izumi take part in situations with the other characters that will inevitably become sexually charged. She either has no idea, is oblivious, or, worst of all, simply doesn’t care.

Izumi is similar. His instincts will eventually control him if pushed to his absolute limit, but these moments are rather uncommon. Sometimes, he himself won’t let their relationship move forward, like when he “has to go to the bathroom” when Ui says right to his face how she won’t run away from him, readying herself to kiss him outright.

As for everyone else, Okusama should get some credit for providing its side characters with a moment or two to shine. Ayane gets to see what it is like to have a boyfriend, Karen learns to not hate Izumi’s guts as much, and Honoka creates some scenarios for Izumi, Ui, and Rin to comingle within.

But even this credit is difficult to see as a positive when one realizes that they are also getting in the way of what is supposed to be a “marriage” between Ui and Izumi. Ayane gets somewhat tacked on as last-ditch option for Izumi, Karen’s episode doesn’t incorporate Ui to any large extent, and Honoka comes off as an unnecessary addition to the cast when she barely contributes to the plot besides snapping a few phots here and there.

Again, Okusama isn’t a “deep” anime, and the sole reason for watching it is to see some occasional boobies, so a lot of these gripes are “pointless.” Still, when the anime is arguably an anime about Ui and Izumi, and what’s presented is anything but, the show does not do itself any favors.

The opening track and the ending track are (understandably) small pieces that help to set the tone for Okusama.

The OP uses piano and drums to create a fast beat with a sense of nostalgia, but the grating instrumental in the background is way too distracting no matter how many bells go off. The ED is even shorter than the OP (twenty seconds versus thirty seconds), but it stands as the better of the two thanks to its happier feeling through blaring trumpets. Also, letting the voice actresses for Ui, Rin, and Honoka sing their own versions of the ED gives it more variety than its OP counterpart.

These voice actresses are Ayana Taketatsu, Minami Tsuda, and Sora Tokui (respectively). While Ms. Tokui does not have any notable scenes, Ms. Taketatsu knows how to pout, Ms. Tsuda has the authoritative drive, and the two can moan when needed.

(And a small shout-out to the talking hormones, condoms, and erections that supported the show in comedic fashion.)

The rest of the original soundtrack remains the same as the first season. A light piano backs the romantic scenes and steps along for the sillier ones. And a nice acoustic guitar accompanies the quieter, simpler times.

Once again, I find myself conflicted over an anime.

On the one hand, it’s frustrating to watch many of the scenes play out when they almost always conclude with some interruption or unnatural shove in the opposite direction. A lot of this interrupting and shoving derives from Rin, but Ui is no better when she fails to make any significant strides due to her odd choices. To be fair, Izumi is just as much at fault with everything as these two, but he at least has the excuse that he’s at their mercy most of the time.

On the other hand, I like both girls. Ui has the caring personality that I find very attractive, and Rin has the bombshell looks that get my head turning. Ui made me laugh with her huge pouts, Rin had me smiling at her blushes, and the two together were no doubt arousing when it came to their ecchi escapades (even if they weren’t exactly novel).

Ui and Rin are totally likable, but everything around them isn’t

I want to like this one more than I do, but the anime makes it hard to do so. The show should just go all the way in one direction with either Rin or Ui. Enough of the back-and-forth, maybe-maybe-not wishy-washiness. Because the anime is cute and funny and arousing – but it just doesn’t know what it ultimately wants to be.

Okusama ga Seitokaichou!+! ends up worse off than its previous season. Further deviation from its marriage motif, less animation, and not enough focus on Ui and Izumi are its biggest mistakes. Its art and music remain consistent, but it’s a show that one will part with long before death.

Story: Terrible, constant refusal to let events play out and even more unnecessary “polygamy” entirely defeat the purpose of the narrative

Animation: Fine, while less movement occurs, the uncensored material and the comedic portrayals keep the visuals both alluring and fun

Characters: Terrible, Ui and Izumi’s relationship goes nowhere as they and those around them impede their progress without fail

Enjoyment: Fine, Rin and Ui are likable, but having both together only makes things unlikable