Which earned attendance this Summer 2016?

It’s one of the reasons why I love this medium so much. It doesn’t always happen with every show I watch, but there are those times when an anime connects with me, going beyond the fancy visuals or comedic asides on screen.

I had this connection happen in a tremendous manner with this season’s set of shows. After finishing the infamous Orange, it inspired me to approach my once-per-season mega essay differently. I made it less strict and more personal. I called my essay Orange and Learning Life Lessons, and it targets precisely what the title details.

Now, in the end, Orange messed up its execution quite a bit (and barely did not make my list), but I nonetheless found myself inspired by what it presented. I saw part of myself in Naho. I empathized with Kakeru. I found that its thoughts on life and living aligned with my own.

Yes, this prologue is an easy excuse to (shamelessly) self-promote that piece of mine once again. But it also serves to highlight something a lot more important. That is, from the top-tier diamonds to the bottom-of-the-barrel chaff, anime can inspire in ways not thought possible.

Maybe an ultra-grotesque show gets one thinking about religion. Maybe a complete life do-over makes one wonder what could have gone differently in their own. Or maybe it causes one to try out a new style of writing. It doesn’t matter if the show is “good” or “bad.” What does matter is that a strong connection has been made, inspiring like never before.

In keeping with the spirit of inspiration, this season inspired me to (yet again) compose a list of the best of the best. In total, nineteen different anime vied for a coveted spot. Ten tickets were handed out, and only one among them was given the title of Best Anime of Summer 2016.

Per usual, here are the rules.

First, I am an advocate of an anime counting in the season in which it completed. Meaning, whether it is fantastic or not, an anime starting in Summer 2016 has no place here. (Oddly enough, I did not pick up any two-cour series from this season.) On the opposite end, an anime like Kuromukuro does have a shot since it concluded in Summer 2016 despite starting the season prior.

Meaning, if you do not see Kuromukuro here on my list, that means I either did not see it or it was simply not good enough. (It’s the latter!)

Second, each anime has a personalized review that demonstrates why it deserves to be here in the first place. Simply click on an anime’s name to be linked to its review to read my complete thoughts on it. For every review that I wrote for this season, follow this link to my Summer 2016 Reviews page!

With all of the introductions, formalities, and rules out of the way, it is time to get to my Top 10 Summer 2016 Anime! 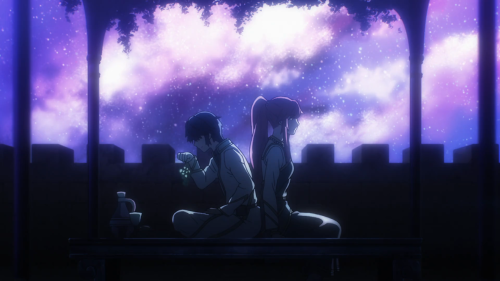 They say to work smarter, not harder. For who wants to expend extra energy when it’s unnecessary? For Nejimaki Seirei Senki: Tenkyou no Alderamin, the laziest “soldier” imaginable takes this mindset to heart, leading his compatriots to victory while catching as many winks as possible. This anime is rough around the edges from poor pacing and worsening animation quality. However, the combined war-religion-science ideas create a solid foundation, and Ikta and Yatori’s platonic relationship makes for an interesting pairing. It may not have the sky as its limit, but it at least gets off the ground well enough.

A shy, embarrassed “bunny,” a waifu-having artist, a rambunctious foreigner, a super slacker, and an acrobatic chuunibyou. In Kono Bijutsubu ni wa Mondai ga Aru!, these five weirdos interact with each other on a constant, hilarious basis. Admittedly, the anime does not present anything overly impressive. However, the mini-episodic format, the cutesy romance, and the subtle jokes are backed by fluid animation, fun-filled background artistry, and a handful of strong musical pieces. The anime may have “problem” in the title, but it paints itself in a not-so-negative fashion.

Chop up the cuteness, defrost the slice-of-life, and wash the comedy. Mix these ingredients together, and add a dash of drama. The result? Amaama to Inazuma, an anime about a father, a daughter, and the relationship they share together. Its contents may be as repetitive as making grandma’s homemade cookies nonstop, but the anime still has that chocolaty, doughy goodness thanks to Kouhei and Tsumugi’s heartfelt bond. And, while it refuses to explore some of the more obvious ideas pertaining to their situation, the story makes it easy to see why being a parent is not sour, not boring, but truly wonderful.

For Mob of Mob Pshycho 100, life hasn’t always been smooth. He’s without friends, without a social life, and even without emotions. But he has something that nobody else does: immeasurable psychic powers. So it is that this show focuses on what these powers can do and, more importantly, what these powers mean. A theme on potential supports the plot, and another theme on self-worth supports the characters. But, above all else, the visuals are a charming treat, basking in intrigue and detail whenever the events start to ramp up. Certain members of the cast and the humor at large are not for everyone, but there’s enough execution and passion in the project to give it more than a passing percentage.

6. Shokugeki no Souma: Ni no Sara 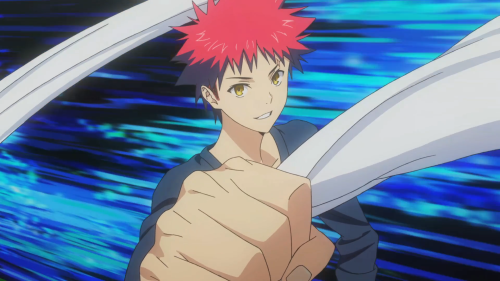 Hot out of the oven, Shokugeki no Souma: Ni no Sara caters a tasty dish in second-season form for all to enjoy. The imaginative artistic scenarios and the food wars return once more, but the latter ironically prevents the show from branching out like it used to. Even so, the different character introspections and the hype moments continue to bring both entertainment and silliness by the barrelful. And, thankfully, this is one meal that can be eaten again and again without getting an upset stomach.

Angelo Lagusa was just a boy when his world violently vanished before his very eyes. Now, as Avilio Bruno, Angelo has only one thought on his mind: revenge against the men who wronged him. Thus, 91 Days follows Angelo on his quest as he lies, connives, and murders his way towards his ultimate goal. Its visuals encounter too many obvious hiccups, and the exploration of its cast lacks much-needed depth. But the intense moments, the setting-inspired soundtrack, and the completeness of its story provide a very solid (albeit very typical) revenge tale. Altogether, it’ll make one wonder why he or she didn’t start it thirteen weeks earlier. 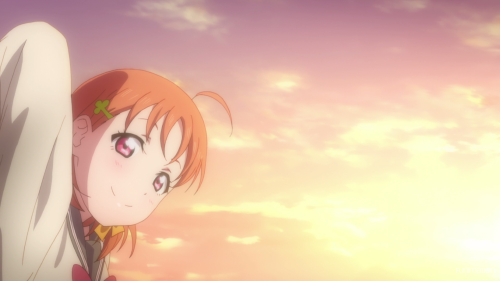 Chika Takami viewed herself as “a normal person born on Planet Normal.” When she discovers the world of school idols, though, she finds herself chasing after a dream that is anything but. Thus, Love Live! Sunshine!!, the next iteration in the Love Live! franchise, begins, following Chika and her friends on their quest to be the next best idols. The insert songs and dances are engaging, but it is themes on inspiration and maintaining one’s self that give the anime its voice. It may not be able to hit its dramatic notes with grace, but, with nice animation quality and a host of cute characters to root for, these idols shine all the same.

The blue, open ocean is teeming with life and wider than the eyes can see. It’s also home to amazing possibilities. Teko of Amanchu! didn’t used to believe as such, but, after meeting the bubbly Pikari, her outlook on life begins to change. As an iyashikei (or “healing”) anime, the story told is gentle and thoughtful, granting beautiful moments of sincerity and warmth. Most of all, Teko’s shift in mindset is simply joyous to watch. Unfortunately, it severely holds itself back by adhering too much to its sister series. Nevertheless, it’s a happy, heartfelt experience that deserves a dive or two. 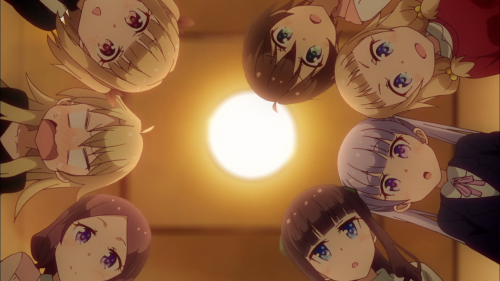 The 9-5 schedule. The constant delays. The difficult problems that need solving. In short, work is hard. For the pretty ladies of New Game!, they experience this sentiment firsthand — while showcasing the positives too. Strong, colorful artistry carries the anime far, and workplace familiarity in both the scenes portrayed and the types of employees represented make this slice-of-life outing both fun and even somewhat accurate. It’s not a serious or dramatic show. Perhaps a bit too peppy. But that doesn’t stop these semi-yuri, overly kind women from soaring and hopping towards their own video-game success. 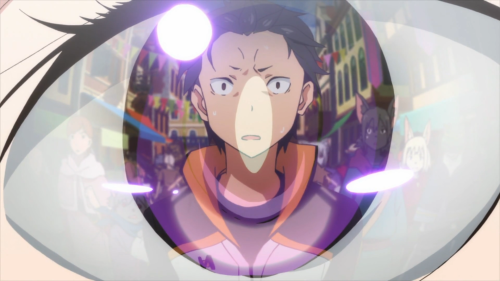 Surprising very few this time around, Re:Zero kara Hajimeru Isekai Seikatsu stands above the rest this season. Featuring an interesting plot mechanic, a slathering of darkness, and highly entertaining moments, the tale that unfolds is thrilling to say the least. Subaru makes many mistakes and questionable choices, yet, through his plight, a relatable, human character emerges, delivering the message that never giving up will ultimately lead to total goodness. Small flaws pop up here and there, but they don’t hold the show back from definitively earning the title of Best Anime of Summer 2016.

And that’s it, ya’ll! As always, I want to thank each and every person who took the time to check out my site, read my reviews, and pass on kind words. From the Internet strangers to my friends over at the /r/anime community, you guys and gals rock more than you’ll ever know.