The ocean is a vast expanse of salty water that supplies us, the animals, the plants, and the Earth itself with necessary benefits. Indeed, we thrive on its presence. I’ve had a few trips to the ocean myself, using it as a chance to enjoy the relaxing air and appreciate its impossible horizons. And so upon this blue alley does Azur Lane set the stage for its numerous conflicts.

It fills this stage with factions made up of anthropomorphic ship girls who have different base motivations when it comes to their collective foe: the Sirens. They go about their daily lives and combat among the waves – only to have the anime crash-and-burn its prospects.

Before the fireball, the anime at least tries to maintain altitude with parts of its production values.

Artistically, the anime cannot escape its static ocean setting, yet its nice lighting and its immense variation in the designs of the “ships” demonstrate some foresight. The CG too, while not the greatest by any means, isn’t an automatic distraction and instead gives the rest of the animation some fighting chances.

Sonically, it goes for lots of big explosions, roaring artillery, and soaring metal to achieve a neat atmosphere for the battlefields. Voice-acting performances similarly pass the mark, if only for another set of immense variation in the roles heard. And both the opening track “graphite/diamond” and the ending track “Hikari no Michishirube” have working wheels. The former has the scale to match the show, and the latter glides out each episode with a softer ambience.

But the maintenance stops here, for the anime takes on the hideous form of Frankenstein’s monster quickly enough.

On one wing, Azur Lane takes its time to at least adequately explore its themes on war. Sure, it loves to repeat ad infinitum the phrase popularized by the Fallout franchise: “War never changes.” But otherwise, it flies straight with its introspections on war’s meaning, what it causes, and how it manifests in general. Nothing to phone home about, but it gets the job done. 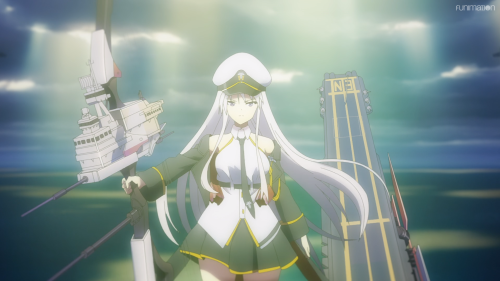 Enterprise is a solid pivot for the themes at sea

Enterprise spearheads the war themes, viewing herself less as a person and more as a machine destined to fight forever. Her growth from a resolute soldier to an understanding person pits her against the world and herself. She learns about the happiness of others, faces her own fears, and changes her outlook on life. Again, the writing doesn’t exactly earn top-tier awards, but, with Belfast also present as a guiding maid along the way, Enterprise stands tall as arguably the best part of the anime.

On the other wing, Azur Lane goes out of its way to completely nosedive this conversation with unnecessary and even gross sexualization. It cannot be understated how obsessive it gets. Random lewd interactions. Talks about bust sizes. Odd “romance” setups. Ecchi itself isn’t a problem, but, when it is so misplaced or so off-putting (or both) as it is within this anime, these ridiculous sexual decisions plague the project with their lameness and their stupidity.

And that’s just in the narrative; the art still suffers the same fate. Some character designs make those ludicrous female armor sets in video games seem convenient, and the incessant need for underwear shots are dumb at best and concerning at worst. Seriously, the anime is almost incapable of stopping itself from including such bizarre content.

In combination, this monstrous plane rolls into nice thoughts about why one fights in the first place only to then yaw into a scene about body image that not only has next to no relevance to the larger context of Azur Lane but also seems to exist purely to have a montage of naked women on screen. Such chaotic turbulence becomes a nauseating ball of chaos that rarely (if ever) subsides.

Even when Azur Lane straightens up, it continues to careen towards the water. Its comedic bits go against the dramatic spirit of the anime, taking away from the seriousness of the situation. Moreover, a noticeable lack of outcomes and consequences ruin its plot. Many scenarios are either for show or are undone at some point, and many characters often leave each battle without much to show for it. In either case, the plot breaks apart and tension wanes when nothing really seems to matter or go anywhere.

More problems surface still. The abhorrence of certain technological advancements, while reflections of real-world society, arrives far too late into the season. There’s also way too many “character is about to get hit only to be saved at the last possible second” moments to count them all on two hands.

The parallel subplot involving Javelin and Ayanami serves to correct a portion of the misgivings within the anime. Yes, some of its slice-of-life asides tend to sidetrack its path now and again. And yes, it retreads the same “ground” over and over. But the underlying intention of bolstering the war themes through this idea of common threads isn’t left to flounder outright.

Yet Azur Lane tumbles again with its other prominent pairing: Akagi and Kaga. Their mishandled issues, both individually and between each other, are laughably silly. Especially so when they act as the biggest antagonists within the story.

However, the slight positives in the production values mentioned earlier? They also have negatives to deal with.

Some of the animation sacrifices extra showcases of movement for sloppy artistry that may not have been worth the effort. Plus, there’s at least one occasion where an incorrect redraw of a still frame pops into existence, indicating an inexcusable oversight for the art. And, for the audio, the original soundtrack has less effectiveness with its non-skirmish pieces than it believes.

And I would be remiss if I went without highlighting my own qualms. Those gun battles and those missile fights are an uninteresting mess of blowing up the same enemy ships. The characters are generally unlikable no matter how cute or fun or cool the anime attempts to depict them. And, last but certainly not least, the ecchi angle was absurd. It all culminates into an unwanted experience that deserves no remorse.

Azur Lane crashes at the port. A theme here and a character there cannot hide the fact that it capsizes with impunity in nearly every other category. The content is wrong. The production values are meager. The entertainment is low. Let this one drown in the ocean.

Art & Animation: Bad, nice lighting and tons of design variation fail to cover up the visible mistakes and the sloppy animation

Characters: Bad, Enterprise is solid as a thematic fulcrum, Belfast somewhat supports, and Javelin and Ayanami act in parallel to Enterprise, but the ordeal surrounding Akagi and Kaga falls flat, and the remaining characters are largely inconsequential

Music & Sound: Fine, a passable OP-and-ED duo work alongside a ton of VA performances and wartime noises, but the OST lacks the same effect

Thank you for taking the time to read my review.