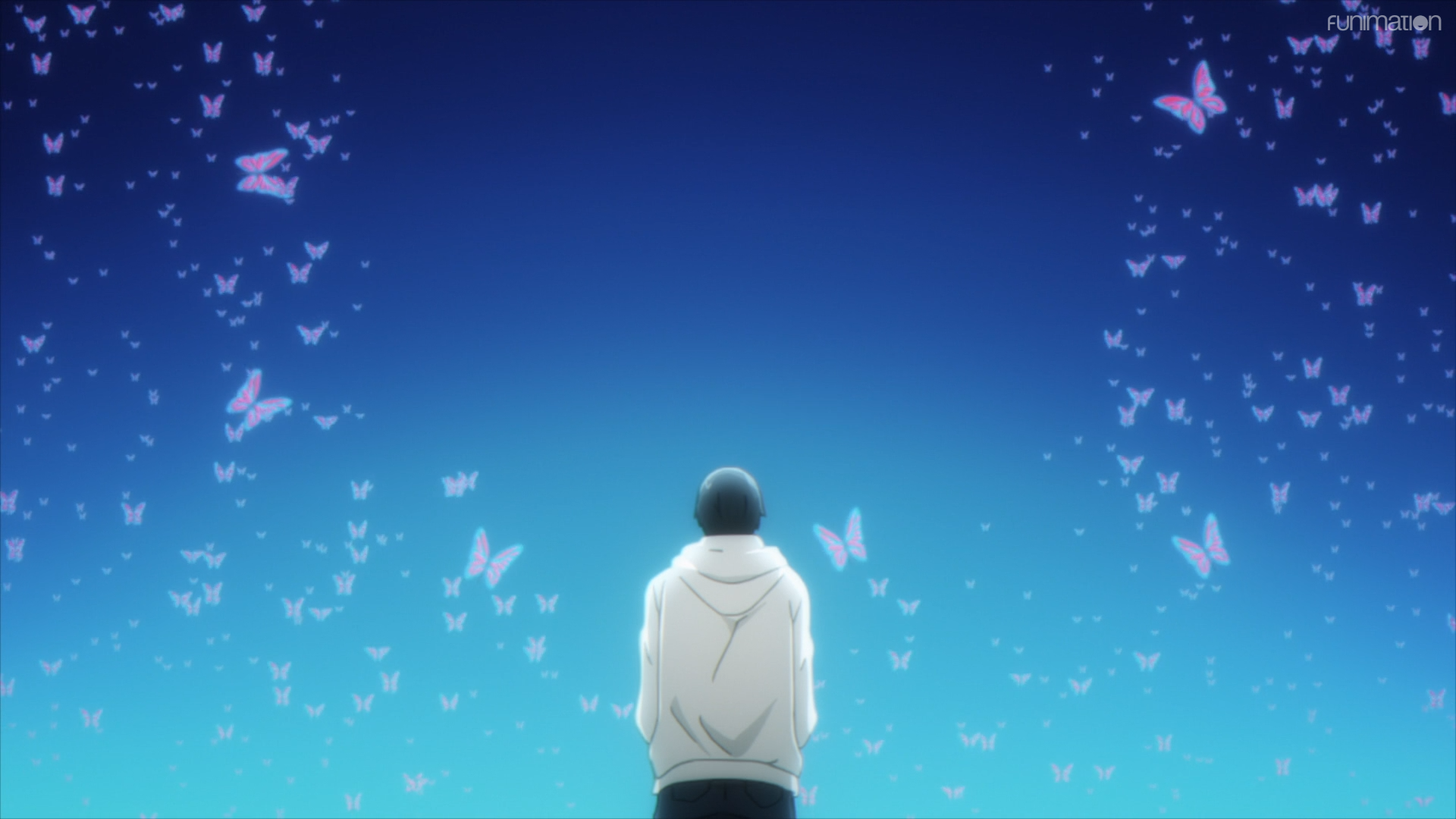 Charles Darwin is the man who discovered (or at least made most famous) the theory of evolution: that natural selection has led to all known life on the planet. In essence, the idea explains that, for a given environment, the strongest (or at least most able-bodied) survive, passing on their genes to their offspring. They go through the same survival steps to pass on their genes, and so on and so forth.

Darwin’s Game puts that survival mentality to the test, but it misses the selection process by a wide margin.

The widening begins from the start. Kaname is a normal high-school dude who accidentally joins the “Darwin’s Game” app, forcing him to fight in duels and matches where killing becomes the usual. The catch? Users have their own “Sigils” that act as superpowers, and winning these competitions (violently or not) earns the victors massive sums of cash.

Kaname wants nothing to do with these killers and money-hoarders, so Darwin’s Game hinges on his (relative) counterintuitive ideals. In doing so, though, the show reveals its own ineptitude. It will bring up concepts like underground societies then never refer to them again. Mishandled themes about killing and the like pop up everywhere as incentives and balance to the ideas don’t equalize. And players repeat the same tired dialogue for no real reason other than to remind the audience in case they couldn’t remember, leading to a lot of frustration with the writing.

Most of the given events also transpire with such unfairness that it seems as if the story forgets its own rules, as if the characters ignore their own abilities. Kaname will be allowed to walk away unscathed from altercations one moment and then just-so-happen to forget about a crucial detail with the strongest player around the next. Not plot holes per se on either front, but they are huge conveniences to force the plot (ironically enough) in an unnatural manner.

As the season nears its finale, the narrative finally begins to go somewhere interesting – only to finish without capitalizing on its newfound direction. Even then, abnormal choices, awful scenes, and awkward points stop Darwin’s Game from having a clean landing.

The artistry likewise forsakes cleanliness with bland, uninspiring decisions. If the “camera” did any more panning or zooming of its scenes, it would have to be sent back for repairs. The anime also loves its blank backgrounds so that it may avoid putting in more detail during action-oriented sequences. Speaking of, both have their own faults. The settings contain as much intrigue as Kaname’s flaccid design, and the action floats along solidly enough but not without some stiffness in tow.

Kaname and the characters hardly stretch any better. Kaname himself is a do-nothing guy spurred on by the deaths of his friends that the audience cares very little about. He refuses to kill, vowing that victory goes to the survivor regardless. It forces him to drum up out-of-the-box solutions to the problems they face, but, ultimately, it places him in a rough spot character-wise when his persona and motivations leave much to be desired. 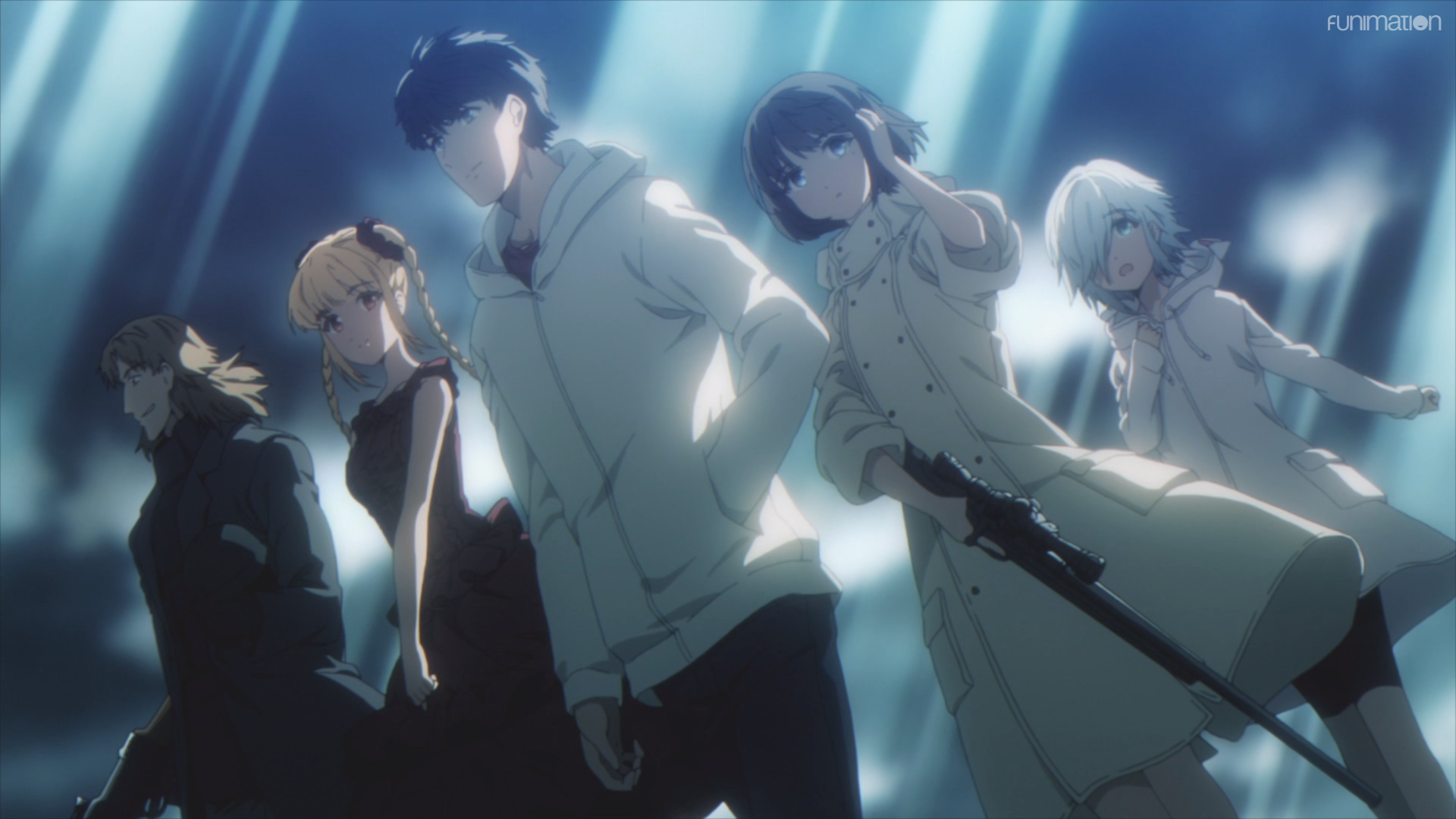 Most of the characters end up being

Way, way later on, his contradictory development is wishy-washy at best. However, if nothing else, it represents a stark change for Kaname, a change that Darwin’s Game tests outright and builds upon over the course of the season. That is to say, his growth isn’t unfounded, and it at least provides the anime some comeuppance.

Still, other characters are worse off: Shuka, Ryuuji, Souta, and Wang are even bigger failures. Shuka at least has her psychotic personality and strong powers to compensate for her irrelevant backstory and relegation to a sheep. Ryuuji suffers no consequences for his misguided attempts, and his drive to fight sees no satisfying conclusion for him specifically.

Souta (and Sui) is more or less tacked onto the anime for pretty much no other reasonable purpose other than to give the squad someone who uses an actually interesting combat skill. As for Wang, the leader of the Eighth clan, he’s meant to represent the embodiment of far-gone murderous crazies playing this game. But he’s so over-the-top that he cannot possibly be taken seriously as an antagonist with his wailing about chopping people up.

Rein is arguably the single worthwhile character in Darwin’s Game. She is “The Analyst”, capable of using her “Laplace” Sigil to not only sift through large quantities of data but also to calculate probabilistic routes to maximize her future chances. I.e., she’s a walking supercomputer (with a sniper rifle). While her actual characterization isn’t anything special, she’s a “main” supporting cast member who learns to socialize and to trust during the fiasco.

The gun fights and the evil guys were extremely uninteresting

I use the term “fiasco” because of my non-existent enjoyment with the anime. I heavily dislike gun-focused battles, for their obnoxious tendency to almost never make sense removes tension from the skirmishes. The anime follows this same sentiment for a large portion of the action when Kaname and other important characters dodge, evade, or miss nearly everything – save when the story randomly gives the okay to go the other way.

I also find Kaname himself to be loathsome, and Shuka is nowhere near as “fun” as the show tries to depict her. As a result, while Darwin’s Game threw in some sparse romantic parts, their relationship came off as a subpar afterthought. Not to mention I care not for the other characters who have no redeeming or intriguing qualities.

Intrigue escapes the audio, too. It provides few benefits, for most of it is quite forgettable after the fact. “CHAIN” and “Alive”, the opening track and ending track (respectively), try to instill energy and melancholy through their vocals and pacing, but they don’t catch the ear as they lack special or dynamic traits. Similar musings go for the background music. Although, to their credit, Yoshitsugu Matsuoka nails the insanity of Wang, and Reina Ueda as Shuka gives the lunatic lass a cutesy voice that contrasts well with her arrogant attitude.

And, as they would most likely agree, that’s about as big of an olive branch as this anime earns.

Darwin’s Game loses. From the less-than-mediocre production values to the overwhelming issues with its storytelling elements, it may as well be begging for mercy to see better days. In short, this project did not survive.

Story: Bad, this death-game-gone-wrong gets a lot wrong with its narrative ineptitude, its unnatural plot progression, and its awkward ending

Art & Animation: Bad, while movement is solid enough, the “camera” work, the lame designs, the lacking details, and the unimpressive setting leave the artistry in a sorry state

Characters: Bad, Kaname possibly “grows”, Rein is a “main” carry who’s more of a hard support, and the remaining important players fail in their inclusions or in their arcs

Music Bad, the OP, the ED, and the OST are not close to memorable, but at least a couple of the VA performances try to demonstrate some modicum of quality

Thanks for taking the time to read my review.