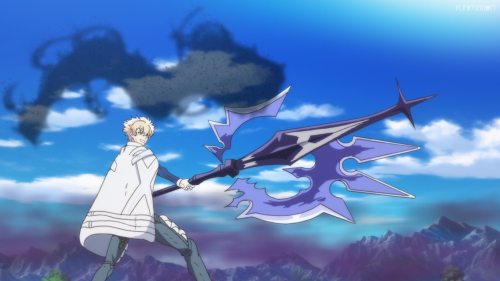 When playing video games, we can separate our reality from its fiction. We understand that the “people” on screen are just a bunch of pixels, models, and sounds that merely copy-cat others we see every day. But what if they were meant to be seen literally as people? Not just fancy coding but practically indiscernible from the real thing?

Infinite Dendrogram runs with this premise, crafting a decidedly weak anime around it.

Which is unfortunate because it has a bunch of parts that I myself enjoy. The setting, jargon, and gear satisfy that gaming itch. The combat – primarily focused on close-quarters duels with swords and fists and the like – provides some intriguing setups when present. And Ray, Nemesis, and the rest aren’t annoying in either their personalities or their characterizations. Unfortunately, the anime can’t quite hold onto its enjoyable factors, for most of the project feels all over the place in terms of execution.

For instance, large-scale enemies serve as the big checkpoints within the anime. Ray and Nemesis (possibly with other friends) square off against these gargantuan foes, matching the impossibility such games task a player. They provide the satisfaction of not only defeating boss monsters but also progressing the story in important ways.

Yet Infinite Dendrogram will then go on to make some awkward mistakes. It doesn’t do a swell job at building the world therein despite its emphasis, succumbing to the narrow focus of its events. Worse still, the anime has a tough time creating tension both in the action presented and in the drama that unfolds since the effects and consequences afterward lose out on being compelling or fair.

Then it will swing back the other way as it posits thoughtful thematic ideas. Should these players care about the virtual denizens they interact with so often? How much about a person can one deduce from an online persona? What challenges does an intermixing of both sides introduce?

Yet it goes back the other way again when it fails to follow through on such thoughts. While the crux of the issues Ray faces stem from those themes on humanism, Infinite Dendrogram tends to sidestep major exploration of them, preferring instead to let societal or philosophical musings go unheard. Not that it requires these things, but choosing to half-heartedly ask those previous questions by way of not answering them hurts the show more than it helps.

Then it will go back again as it does a nice job of framing Ray as a normal protagonist. Sure, he’s got overpowered abilities and a unique-enough class – but so do the other Masters in the field. In fact, Ray (for now) isn’t even ranked in the upper-echelon Superior tier, signifying that he isn’t even all that powerful with stricter comparisons. By framing Ray as a somewhat regular dude, the anime puts itself in a favorable spot for thinking about the world around him.

Yet it will handle so many of its other characters incorrectly. Cheshire is forgotten about near the beginning. Rook and Marie are given the bare minimum to their backstories and only when it’s demanded. Most egregious of all, Nemesis seems to take a huge backseat after the halfway point. Not only does she have a sparse amount of dialogue, but also her contributions (outside of literally being Ray’s weapon) dwindle to a paltry sum.

Perhaps the only area where Infinite Dendrogram is rather consistent is in its production values. Sadly, it’s consistently no good.

Despite the world they’re in and the nearby kingdoms, the show has a surprising lack of variation in its environments, sticking mostly to same-y forests, open fields, and unassuming streets. Moreover, the details and the movements have a rigid quality that prevents them from standing out in a strong fashion.

Designs for characters such as Figaro, Xunyu, and Shu at least demonstrate some of the fun gaming diversity seen in armor and crazy weapons. But the anime keeps with its consistency as jarring CG entities, rough models, and simplistic lighting once again work against the show. The combined vision for the visuals simply falls flat.

Same goes for most of the audio work. From the uninspiring opening and ending tracks to the forgettable voice-acting performances, much of the sound design comes off as passable at best and yawn-inducing at worst.

By the end, the anime certainly knows full-well that this season exists as just the formal beginning for the rest of whatever adventure remains, what with certain character predicaments, the establishing of a persistent antagonist, and variables left unknown. However, even if the tagline of the game says it “offers a new world and your own possibilities”, this world crafts only a single possibility: not giving it any further time.

Infinite Dendrogram attempts to think about online worlds in a different manner, but it cannot escape its low execution. The narrative has little to work with, the cast have even less, and the artistry and the audio complement such mediocrity. While few likable pieces can be found scattered about, the coding has even fewer ifs or elses to consider.

Characters: Bad, Ray has a nice place as a relatively “normal” protagonist, but Nemesis and the supporting cast do not match his stride

Music Bad, largely tiring across the board

Thanks for taking the time to read my review.