The banana is sometimes considered one of nature’s most amazing creations.

Commonly produced. Comes in bunches. Easy to hold. Sweet taste. Biodegradable packaging. Penchant for comedy. Not since the apple has there been such a fruit, such a food that has given humans so much with so little.

While people love bananas, nobody loves them as much as Yoshiko of Aho Girl. And, while she may have less brains than one of these yellow-wrapped fruits, she upstages their comedic value with her own brazen stupidity.

At roughly thirteen minutes per episode, Aho Girl has only so much time to get its audience laughing. The show knows this dilemma, and so it delivers unto them a near constant stream of comedy that does not stop for nearly its entire run.

Much of this comedy revolves around Yoshiko, the titular character of this project and quite possibly the dumbest person to ever exist. Ever. That’s not a slight against her. Everyone in the show agrees with this statement, and Yoshiko herself couldn’t care less what others think about her let alone what they do for and around her.

Which leads directly into what Aho Girl showcases.

It loves its loudness. Yoshiko and the others did not learn about the concept of inside voices, so their exchanges quite quickly devolve into shouting matches. Admittedly, some people may be put off by the obnoxious yelling throughout the season, especially from the banana-pining girl who elevates her voice when even remotely excited. But such high energy supercharges the mundane events depicted, giving them a comedic push down the right path.

Slapstick never goes away. Yoshiko’s vacant noggin equates to weakened pain receptors, so she often succumbs to many a bruising and a beating both of her own accord and at the hands of Akutsu. Of course, everyone involved punches, kicks, and tackles without remorse. From the three gyaru girls simultaneously punching the lovable idiot to Yoshie duking it out with Iinchou, the physical comedy complements the loudness with ease. 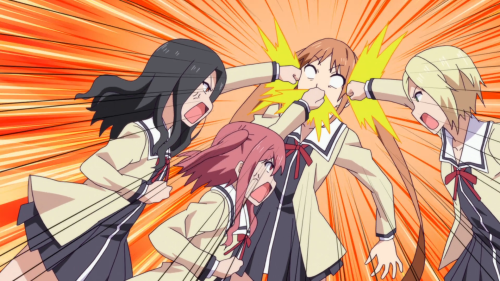 Slapstick dominates a lot of the loud, hilarious comedy

The idiocy does not falter. The events seem normal at first, but Yoshiko’s arrival, words, or mere existence twist the dial of intelligence down to zero. She plays hide-and-seek for days on end. Akutsu and Dog bond over a particular movie scene. Yoshie must confirm Sayaka’s purity while revealing too much information about her own person. In other words, the show is stupid not in a negative sense but in a purposefully ridiculous one, further improving the overall hilarity.

Aho Girl also makes small decisions here and there that help guide the show along. Its scenes split up into distinct parts with a small amount of crossover and callbacks to make the stream of comedy that much more digestible. Moreover, the show also varies up its content as much as it can, like when Yoshiko disguises as the male Yoshio to cheer up their teacher or that time where the group go on summer vacation filled with a couple of ecchi escapades.

To be fair, nothing within the anime is exactly novel. But that doesn’t stop its loudness, its slapstick, and its idiocy from giving this comedy anime its clout.

Aho Girl continues its strong execution with an appreciable set of visuals.

For instance, due to the time constraint, the show makes use of its opening track’s frames to deliver even more comedy. They almost always change the setup: Iinchou looking longingly at Akutsu, Sayaka acting as an angel in a play, a flurry of Yoshiko faces that fill the entire screen. Small stuff really, but these constant changes give the audience something to look forward to at the start of every episode rather than the same tired montage.

Otherwise, the anime includes elements that continue down its comedic path. Lots of speed lines accentuate the characters’ yelling and crazy actions. Missing pupils give them their “dead” looks after a kerfuffle of any kind. A cheerful banana censors out any particularly ecchi displays. And the various imaginative sequences, like a giant Banana Froppeccino Deluxe floating in the sky, a flurry of hearts as Yoshiko jumps in for a kiss, or a manga-like style as she races a motorbike rider while riding Dog herself, change up the often-lacking background artistry.

Some flair for the visuals pops up now and again

The actual animation in general remains involved throughout the season, too, lending further credit to its strong execution. This direction is thanks mostly to the constant brawls, reactions, and situations the group normally find themselves in and make for each other.

Unfortunately, Aho Girl does not perform as well when it comes to the designs of its characters. While the cast members often just wear their unassuming garb for school, their somewhat same-face looks – especially when yelling all big mouthed and wide eyed – reduce variety in their potential depictions the most. It also does not help that their colors and looks in general do not go for anything too striking.

Even so, those fun OP frames, extra comedic elements, and noticeable movements keep the anime going strong despite the designs not quite stacking up.

As purely a comedy anime, the characters of Aho Girl focus first and foremost on, well, comedy. They toss aside complexity and say to themselves, “Let’s get the audience smiling with our strangeness.”

Many of those smiles come from Yoshiko herself. It cannot be overstated how dumb she is. She has next to zero attention span, has little care for consequences, and has no desire to do anything except what she deems as in-the-moment fun.

Thus, she does not pick up on even the most normal of societal cues, leading to her raucous behavior no matter where she is or what she is doing. It may mean running all the way to a farmer’s farm X kilometers away just to tell him that she likes his produce, or it could be the case that she pukes from eating one banana too many after declaring that she cannot eat another. Either way, Yoshiko refuses to follow the norm, and, for this reason, she improves the comedy present without fail.

Everybody is a little strange in their own respective way

When she isn’t playing dolls a little too realistically with the local kids at the park, she often spouts backwards logic that somehow, someway makes sense in her signature lunacy. Most importantly, Yoshiko desensitizes the audience to and accentuates the strange traits of the other cast members. Akutsu’s standoffish personality. Iinchou’s stalking tendencies. Yoshie’s psychotic mindset (like mother, like daughter). If nothing else, Dog is literally smarter than her, giving his scenes an actual basis besides just being more aware than usual as a pet animal.

In turn, Yoshiko’s relationships create even more comedic opportunities. Ruri is sadly an idiot like Yoshiko on certain levels, so Yoshiko tries to bond with her fellow moron whenever she can. Ryuuichi looks up to her as his boss, going from a delinquent to a dude who just wants to hang out with some friends. And Sayaka, the most regular person of the whole group, offsets Yoshiko’s overbearing asides, but even she breaks down on occasion around her friend, the contrast inviting another round of funnies.

Yes, the characters are simple. But that fits Aho Girl perfectly. And, at the end of the day, they follow through on what they had in mind. Which means that it’s tough to ask for much more out of them.

The anime packs in as much fun into its audio design as it can.

For starters, Aho Girl wouldn’t be Aho Girl without its, well, “aho” girl. To this end, Aoi Yuuki as Yoshiko deserves a ton of props for her lead role as the twin-tailed weirdo. If she isn’t passed out on the floor after taking a punch to the face, she’s yelling as much as possible, creating an annoying yet hilarious voice for the star that doesn’t let up for the show’s whole (and short) run.

Tomokazu Sugita as Akutsu also dishes out hilarity with his scathing hatred for his less-than-ideal neighbor, but the opening track “Zenryoku☆Summer!” brings even more smiles into this sound space. During its one-minute timeframe, it goes all over the place while still following a clear path. Quick lyrical deliveries, differing vocal tones, bongos, the distinct noise of a metal bat hitting a baseball. Combined with the occasional chimes and goofier background sound-effects, the OP forms as a silly, catchy tune that sets the comedic tone for the series without any effort.

A catchy, silly OP sets the mood right away each time

The remainder of the music, however, doesn’t reach those same hits-a-funny-bone heights. The ending track “Odore! Kyu-kyoku Tetsugaku” is pretty much an afterthought, playing underneath the outro scenes of Aho Girl as a mediocre poppy song. And the original soundtrack – even with its different meandering, guitar, and classical pieces – doesn’t exactly push forward with a ton of intrigue. It at least doesn’t take anything away from the show, though.

So, with hilarious VA performances and a just-as-funny OP to back them up, the music and sound for Aho Girl partly accomplishes arguably its most important goal: bringing a sizeable chunk of fun.

It’s been a while since I laughed so consistently while watching one specific anime.

In fact, I burst out laughing so much so that it would be unfair of me to list any scenes since they all got me smiling or chuckling. Of course, as a show defined by how funny its characters manage to be, they were the cornerstone to my laughter.

Thinking back on the show, I liked all of them. Yoshiko somehow one-upping herself in stupidity constantly. Her mom Yoshie doing everything in her power to only allow Akutsu to hook up with her daughter to secure her future retirement. Dog being a good puppy. Akutsu’s little sister Ruri cutely struggling with life. Iinchou’s flashbacks and flashforwards. Sayaka crying as she barely keeps up with their collective antics. Their teacher Atsuko in the classic Christmas Cake role. The gyaru girls introducing a new angle. Ryuuichi just trying to be buddies with Akutsu. Sure, some are better than others, but they each still got me to laugh a lot all the same.

Yoshie and the other characters made laughter a constant occurrence

Overall, I found that the anime was the right length for its content. It had some “romance” too which, while leading nowhere tangible, got a thumbs-up from me. And it also hardly ever strayed away from its comedy roots, remaining straightforward and sure of itself. Truth be told, this anime isn’t exactly clever let alone unique – but I wouldn’t want it to be any other way.

Aho Girl no doubt embraces the first half of its title. It’s short. It’s quick. It’s funny. A three-way combo that ensures an entertaining time. While not the banana of this medium, it peels ahead regardless.

Story: Good, loudness, slapstick, and of course idiocy keep the laughs of this multipart comedy streaming without ever showing any signs of stopping

Art & Animation: Good, fun OP frames, extra comedic elements, and nice actual animation give the visuals strength even if the character designs do not

Characters: Good, Yoshiko is an unintentionally funny girl thanks to her “aho” nature, highlighting the strangeness of the other cast members and holding distinct relationships with all of them

Music & Sound: Fine, boisterous VA performances and a silly-sounding OP rise above a mediocre ED and a passable OST

Enjoyment: Great, have not laughed so much and so consistently in a long while